Interview with A Pearl Harbor Survivor 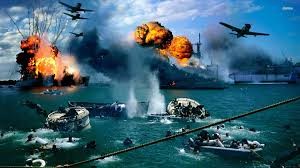 “Thank You” to all the veterans out there.  Because of You, I have never had to think of: being drafted, defending my home or wonder if ‘we will be bombed.’  I live in the greatest country that has ever or will ever exist, provided by you, the defenders of this great nation.  I spent a lot of time with my grandparents growing up and marveled at their sense of patriotism, honor and commitment to each other.  From my perspective: at no time in our history is this more evident than in WWII.   I remember looking at pictures in my Grandfathers Time Life’s WWII book collection before I could read.  I would ask my Grandfather about those pictures and ‘that war.’  He would tell me only that ‘much was lost and much was saved.’  My Grandfathers response fueled my desire to learn about what happened in the Second World War.  I learned about the heart, courage, honor, respect and sacrifice needed to persevere those tumultuous times.

Stan S. born in 1918 at the end of World War I and present for the surprise attack at Pearl Harbor.  I met Stan while working at A Senior Living Community. He first moved into that community in 2012 where I first asked him about his ‘World War II Veteran’ hat.  He told me ‘I was at Pearl..’  I was already in awe of him for being not only a veteran but a veteran of the war I had spent most of my life studying.  Excitedly I asked if he’d mind chatting with me about his time spent in the military and at Pearl.  He said ‘sure’ and a couple of weeks later we talked.  So much was shared about so many details I had longed to know about, but what I remember most was this: After telling me that he had out lived everyone in his company, his goal in life was to be ‘the last man standing’ from Pearl Harbor.  I didn’t have any so called ‘expectations’ of what he might say and still found myself surprised to hear that.  For those of us out there who like numbers, here is a simple question posed from Stan’s response.  How many of the 60,000 or so survivors are left?  Here is an answer from a December 7th, 2014 article in the Washington post by Peter Holley. “Nobody seems to know, exactly.  Last year, 2,000 to 2,500 survivors were thought to be still alive, according to Eileen Martinez, chief of interpretation for the USS Arizona Memorial.”  What we do know is that number is becoming rapidly reduced.

Now, three years later I come back to Stan to get his recollection of that day. This time to remember the details discussed.  Stan begins “I was at the beginning of guard duty with my sarg.”  He recalls the sarg saying “those fools aren’t supposed to be flying this morning…. My God… they’re Japanese!” I was surprised to hear him say “they (his commanders) must have known something was going to happen as we’d had been doing drills for this.”  He couldn’t remember for how long or specifically for what but knew that preparations and plans were in place for something that may happen. He continued “my job was to (transport) the troops down to the beach and that is what I did.”  Once at the beach “I was thinking how amazed I was that this could all be happening.” After that he doesn’t remember much of the day just that he was in “shock and disbelief.” After that he recalls that his ‘Tropic Lightning’ infantry division was sent to Guadalcanal.  Stan said he kept in contact with all the men in his company until there were none left.  My fascination of Stan’s service gave way to a tear filled moment as I could see that he was touched by what he shared and we moved on to more pleasant memories.

Stan had met his wife Betty on a troop train in Lubbock, TX, where she was a server.  Stan told me their eye’s “locked” and he knew she was his ‘one.’  Stan asked for Betty’s address and she declined stating “I have a boyfriend.”  Unknowingly I chuckled loud enough for Stan to hear.  He asked what I was “laughing at.”  My response “well Stan, that line is still used today, quite effectively I might add.”  He gave his own chuckle in response. Stan must have left quite an impression as he did get her address telling her “I’ll wait for it as long as I have to.”  After mailing back and forth for nearly a year the two married, Stan was 27 and Betty was 19. Stan began his career at the Graybar Electric Company in 1945 Belleville, Michigan.  Betty and he decided the cold wasn’t for them and when the opportunity knocked in 1950, they transferred to Phoenix.  Stan was a salesman for Graybar Electric Company covering the ‘whole state’ until his retirement in 1975.

Stan recalls fondly that he has had ‘a good life.’  His wish now remains as it did when I met him in 2012, simply to be the last man standing.  Starting with reaching the sweet centennial mark in 2018.   Stan is humble and as kind as his eyes and demeanor would suggest. He sits proudly with his company D, 35th infantry regiment of the 25th Division “Tropic Lightning” hat, as a well-earned reminder and badge of honor of his efforts and friends lost to a greater cause.  As I am so honored to be in his apartment chatting with him I notice a book that summarizes the connection that brought me back to see him: “’And I Was There’ Pearl Harbor And Midway-Breaking The Secrets” by Rear Admiral Edwin T. Layton.  Thank You Stan S. for your patriotism, honesty, love and service to our great country.  We are all humbly honored and indebted to you.

To Read More about Pearl Harbor Survivors go to: http://www.pearlharborsurvivorsonline.org/